Things got dramatic Saturday when Kanye West went live on Instagram, upset over the fact that he was allegedly being kept from his daughter, Chicago’s fourth birthday party, a claim ex-wife, Kim Kardashian’s camp claims is untrue.

After dad Kanye West accused mom Kim Kardashian of not inviting him to the bash she threw for their toddler, he crashed it and later threw his own.

“He was always having his own party for Chicago. He had it at 4 p.m. at his office downtown [in Los Angeles] that he planned, so it’s so frustrating he crashed Kim’s party and created this narrative that he wasn’t invited,” a source close to the former couple told Page Six.

Multiple sources also divulged that Kardashian, 41, was shocked when Ye, 44, claimed he “wasn’t allowed to know where her party was” in a dramatic video posted to social media – seemingly searching for answers while en route to the party.

“Kim has made every effort to invite and include Kanye for every event,” the source claims.

“I’m just putting this online because I need ya’ll support,” he said at the time.

“I’ve called Kim, texted the nannies, I got on the phone with Tristan [Thompson], he said he’d ask Khloe [Kardashian]. Won’t nobody give me the address to my daughter’s birthday party right now, and that’s going to imprint in her mind that I wasn’t there for her.”

According to the outlet, it was “news to Kim” when Ye went live alleging he didn’t have the info, and that he wasn’t even allowed to go.

“She has never gotten in the way of allowing him to see his kids and makes every effort to give him full access to them,” the source said. “Kim has made every effort to invite and include Kanye for every event. Outside of the ones he didn’t attend.”

The source added, “He did show up for North and Saint’s birthday. She made sure the kids gave him a gift for Father’s Day, his birthday and Christmas.”

Kanye West with daughter Chicago at her 4th birthday party on Jan. 15.

Ye eventually ended up at Kardashian’s party and later thanked Travis Scott and Kylie Jenner for getting him in. Our sources don’t know if that was, in fact, the case, but they maintain Ye’s plan was always to have his own party for Chicago. ”Kim at 12 p.m. and Kanye at 4 p.m.,” we’re told.

“That always was the plan, that he would have them at that time. And he took the kids from the noon party to his,” another family source told us.

Ye has insinuated that Kardashian’s security allegedly prevented him from entering her home with his kids because of boyfriend Pete Davidson visiting the home. Sources told us Kardashian has not introduced Davidson, 28, to their children, but that didn’t stop the rapper from releasing a new song, where he threatens to “beat Pete Davidson’s ass.”

“Even though he threatened Pete in a song [‘My Life Was Never Eazy’] and attacked Kim in the media with lies that only hurt their kids and family, she once again took the high road and allowed him to be with the kids [on Saturday] which she does every single time regardless how he treats her,” the first source said.

According to sources, the feud between the exes is in response to Kim’s requests for more privacy.

“It has nothing to do with co-parenting or the kids, but his feelings with not being able to control her any longer.” 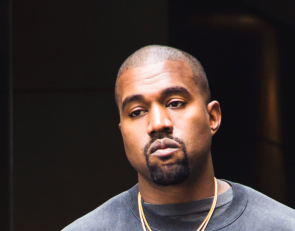