Tristan Thompson’s mistress has revealed new information on their relationship.

The Sacramento Kings player lost his paternity case with the instagram model this week as the judge ruled he could not fight the case in Texas.

Announcing for the first time publicly, Maralee Nichols, 31, dismissed “inaccurate” reports about her relationship with Tristan, 30, and shared her first photo of the brand new baby with E! News.

She said: “Over the past couple of weeks, many inaccurate and false stories have been circulated about me. I have not at any point released—nor have I directed anyone else to release—any information regarding Tristan Thompson or any litigation involving him.”

“I have never spoken to any media outlet, nor have I leaked any information to anyone at any time. I am providing this statement because I feel I must defend my character.”

“I have seen fake stories, unflattering photos of me, people using photos that are not even me, stating an incorrect occupation and age.”

“There have been multiple fake Instagram posts claiming to be me, making false statements and attaching stock photos of a sonogram and a child (neither mine).”

Maralee then cleared the air regarding her location and occupation, demanding: “These are the facts: I have lived in California since 2019. I am not a personal trainer.”

She then added that she met Tristan at a party at his Encino, California home last year.

“I saw Tristan in March 2021 around his birthday. He told me he had wanted to see me,” she explained.

“I agreed to meet him in Houston at a private party on March 12. I never drove a Maserati to meet Tristan, as he claimed. He has never even been in my vehicle.”

“I used an Uber or was driven by friends that weekend. Houston was one of many nights we spent together. Soon after his birthday weekend in Houston, Tristan invited me to visit him in Boston.”

A few weeks after her trip to Boston, Tristan’s alleged mistress said she learned she was pregnant.

She later told the news to the athlete while visiting him in North Carolina at the end of April. She said her baby, a boy, was born on December 1.

In June, the fitness instructor filed a paternal lawsuit against the NBA star in California, and in July, he hit back with his own filed in Texas- where child support laws are often lenient.

The parties both presented their testimonies in a virtual hearing on Wednesday, but the judge saw it fit to dismiss his filing. According to Us Weekly.

Earlier this month, the news broke that Maralee welcomed a son after she claimed to have had an affair with Tristan.

According to legal documents filed in August, the father of three had offered to pay Maralee $75,000 instead of child support in a series of messages.

He initially claimed that they met up and only had sex on his 30th birthday in March, though he has since admitted that they were intimate on multiple occasions. 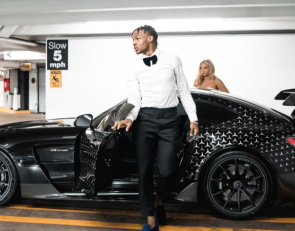