Recently BIP’s newly engaged couple, Joe Amabile and Serena Pitt opened up about taking their relationship to the next level on Bachelor Happy Hour podcast, asserting that while they couldn’t be more elated to be together — they aren’t “rushing down the aisle.”

“We’re not rushing down the aisle. But we definitely feel confident in the fact that we want to be together,” Pitt, 23, said. “It’ll be nice to just take a breath, date, live together, and then marriage will come down the line.”

When asked about the moment Joe decided to make it forever, Pitt said the proposal was a “complete shock.”

“The logical thing to do would be like, ‘This is crazy. This is so fast, let’s just do the step-by-step thing and get engaged down the line,'” she explained. “I was so emotional when he got down on one knee and I was so excited to say yes. I was obviously in complete shock but I knew he was the one.”

Adding, it was a “beautiful” moment to have an emotional reaction and accept, adding that she has no regrets.

The RING,  a 2-carat, cushion-shaped diamond ring — later dished on what’s next for the couple. He said “first things first,” the couple is deciding where they want to live together — Pitt currently lives in Canada while Amabile lives in Illinois.

“We talked about it. We’re either going to possibly try New York together,” he said in the interview. “For the time being, we’re going to split time between Chicago and Toronto but that’s going to be our next big step together, moving in together.”

Pitt added: “It’s kind of just whatever makes sense for us in a couple months both personally and professionally. We both love New York, it’s kind of a neutral space where we’re both making sacrifices to be there.”

“We don’t have kids at the moment so it’s pretty easy so maybe we get a place in Chicago, a place in Toronto, and do 50/50.” 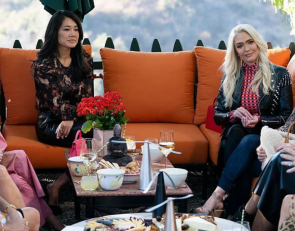