Jets say they're not trading Quinnen Williams, but should they?

Jets say they're not trading Quinnen Williams, but should they?

The Jets are in a position to make some noise with the NFL trade deadline approaching, but there are certain players on New York’s roster that should be off-limits barring the most extraordinary circumstances.

Quinnen Williams is one of them.

Rumors have been swirling that the third pick in the 2019 NFL Draft could be dealt before the deadline. On Tuesday, the Daily News’ Manish Methareported that the Jets are trying to trade Williams, but the report was disputed by multiple Jets beat reporters. Adam Gase then refuted the report on Wednesday, reaffirming that Williams is not being shopped and will remain with the Jets.

“He’s going to be here. Those [stories] are false,” the head coach said, per ESPN’s Rich Cimini. “I talked to Quinnen. I have not heard one thing from anybody in the front office about him being traded… There’s nothing to that. It’s false.” 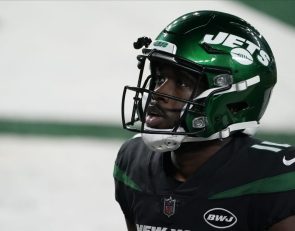