The Cowboys got a throwback performance from a veteran and the Eagles scrapped out a win with a bunch of unfamiliar names, setting up a win-and-your-in scenario for the division next week.

Sean Lee wasn’t even sure if he was going to play.  “It was gonna be close, but I felt pretty good yesterday,” Lee said Sunday night. “When we warmed up, I realized the plan the trainers had really did work in being able to rest me and giving me the best shot to play today. After I warmed up, I said, ‘O.K., let’s do this.’”

Late in the second quarter, the Rams faced second-and-15 from the 20 and called a high-low concept designed to pull the linebacker up to tight end Tyler Higbee to free Woods over the deep middle.

The picture wound up being painted like this: Lee leaping to his right to get in the path of Jared Goff’s throw to Woods, snatching it out of the air—and almost in one motion—sprinting in the other direction, getting it back to the Rams nine. Ezekiel Elliott punched it in three plays later to make the score 28–7 and that, for all intents and purposes, was it.

Lee ended up right in the middle of Jared Goff’s throw to Woods, picking the ball and returning it to the Rams nine yard line.  Three plays later, the Cowboys scored.

The Cowboys wouldn’t look back. Lee had a great moment for his season of redemption.

And the NFC East leaders set the stage for even bigger moment next Sunday. 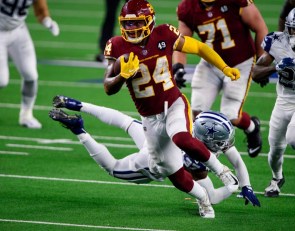